Serotonin is a substance isolated in 1948 and known as the “hormone of happiness.” Despite the fact that is released into the brain, where it performs its functions, about 90% of the “hormone of happiness” in the body is located in the digestive tract and platelets. Serotonin is a substance which has a very important role in regulating the processes of sleep, breathing and heart rate.
Which foods that increase serotonin ? Which are natural ways to to boost serotonin ?

A list of foods that increase serotonin levels. Natural ways to to boost serotonin.

Other natural ways to boost serotonin in the body: spend more time outdoors in the sun and walk. In summer when there is more sunlight, serotonin is retained in the body for a long time. Also drink more water – well hydrated body has more energy and less stress. 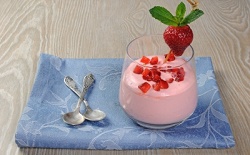 Probiotics are good bacteria that stimulate the production of natural digestive juices and enzymes. They help the digestive tract to function properly. Except in the form of tablets or drops, you can get probiotics by eating probiotic foods that contain live good bacteria. Foods high in probiotics improve the microflora of the body. Health and …