Leptin is a peptide hormone that plays a very important role in energy expenditure in the body. It is synthesized in fat cells, circulate in the blood and reaches the brain. Leptin affects appetite and metabolism. This hormone not only reduces appetite, but also makes us more active, so as to burn more energy. Many people want to know are there any foods high in leptin and how to increase leptin levels.

Are there any foods high in leptin?

Leptin is a hormone that can not be taken orally, because the body can not process it through the intestines. Leptin is a hormone produced in our fat cells. There are no foods high in leptin, that will lead to higher leptin levels in your body. However there are foods, that can help to increase or decrease the leptin sensitivity.
So if you hear of foods high in leptin , be careful.

Leptin resistance is a condition in which the brain does not “notice” the high leptin levels. Some overweight people do not stop eating and their brain does not receive a signal that this hunger has passed. This medical condition is called Leptin resistance. This creates a false sense of hunger and leads to over consumption of food.
Fat cells produce leptin. Leptin sends signals to your brain that you have sufficient fat. But when we have leptin resistance, this connection is broken! So your brain can not get the message! The brain is in “scare” and think that your fat reserves are not enough and that your body is in danger of starvation! What follows is that your metabolism slows down and your appetite increases! 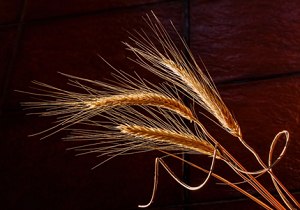