Arginine also known as L-Arginine is a positively charged amino acid, which is healthy for the body. One of the main arginine benefits is that it is involved in building muscle tissue, but this amino acid has many other functions. Generally the body can synthesize enough arginine by itself. There are also many arginine foods.
Arginine functions in the body are: elimination of the toxic ammonia from protein degradation, wound healing, hormone release, a precursor for the synthesis of NO, reduction in blood pressure. Arginine is essential for the synthesis of creatine, citrulline, glutamate; acts as a vasodilator (preventing heart attack, stroke, atherosclerosis, hypertension).
Which are arginine foods?

Some of the foods high in arginine are:

Arginine have namy benefits and functions in our body.

Some of the most important arginine benefits are:

Attention: Before following any diet, consult your doctor. 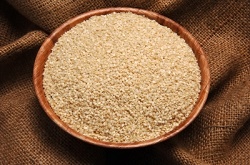 Copper is an essential element in the functioning of our body. It is involved in bone development and production of connective tissue. Foods high in copper are important parts of healthy diet. Copper is needed for the process of generating energy in cells. It participates in the formation of the structure of collagen and elastin. Which are …